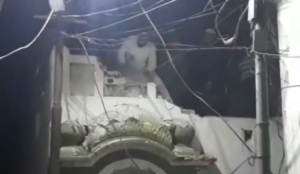 “Historic Ahmadi mosque demolished by mob in Pakistan,” The New Arab, May 24, 2018 (thanks to The Religion of Peace):

A mob in Pakistan tore down a historic mosque belonging to the country’s Ahmadi community on Thursday, in the latest act of violence against the minority Muslim sect.

The attack took place in the eastern Pakistani city of Sialkot, with videos showing Sunni extremists tearing down the place of worship. No worshippers are believed to have been in the mosque at the time of the attack.

The mosque had been an important place of worship for Pakistan’s persecuted Ahmadi sect for the past 135 years.

It was said to be visited by Mirza Ghulam Ahmad who founded the faith and is considered to be a prophet by its followers.

Ahmadis were declared “non-Muslims” by Pakistan in 1974, depriving them of many basic rights.

Ahmadis say that dozens of other mosques in Pakistan have been destroyed or closed down by authorities….